You’ve Got Less Mail: The Postal Service Is Suffering Amid The Coronavirus

If you’ve checked your mail lately, you may have noticed there’s just not much of it.

The U.S. Postal Service could be another casualty of the coronavirus pandemic.

“A lot of businesses have ceased to do advertising through the mail,” says Rep. Gerry Connolly, D-Va., “and as a result, mail volume has collapsed.”

He says the decline could be as much as 60% by the end of the year, which he says would be “catastrophic” for the agency.

The $2 trillion emergency bill approved by Congress last month included a $10 billion loan for the Postal Service, but Connolly, who chairs the House Subcommittee on Government Operations, says that’s not what the agency needs.

The financially strapped United States Postal Service wound up with crumbs in the $2.2 trillion stimulus deal, despite playing a vital role in our nation’s public health and economic stability at this time of crisis.

Rep. Gerry Connolly (D-VA) accused President Trump of personally intervening to strip a Democratic postal rescue proposal from the final bill. Asked on Tuesday for his response, Trump lashed out at the beleaguered Postal Service with a stream of false accusations.

“They lose money every time they deliver a package for Amazon or these other internet companies,” Trump said. “If they’d raise the prices by, actually a lot, then you’d find out that the post office could make money or break even. But they don’t do that…Tell your Democrat friend that he should focus on that.”

Coronavirus Is Threatening One of Government’s Steadiest Services: The Mail

WASHINGTON — Ravaged by the impact of the coronavirus pandemic, the United States Postal Service appealed to lawmakers on Thursday for an $89 billion lifeline, telling them that it could run out of cash by the end of September if Congress fails to act.

But as Washington begins to debate the next round of government relief to prop up the virus-plagued economy, a Postal Service bailout has already emerged as a political sticking point, with Democrats pressing to deliver one and President Trump, a persistent critic of the agency, opposed. The debate appears to be playing out along the same fault lines that have divided the two sides for years as they have quibbled over how to position the cash-strapped agency — one of the government’s oldest and most reliable entities — for an increasingly digital future.

President Trump this week dismissed requests for emergency funding for the cash-strapped U.S. Postal Service, attributing its financial woes to mismanagement as the agency sounds the alarm about the negative impacts of the novel coronavirus pandemic.

Prior to the passage of the Coronavirus Aid, Relief, and Economic Security Act, House Democrats unveiled a plan for a different stimulus package that included a $25 billion cash injection into the Postal Service. The Senate compromise left that provision out, instead providing USPS with a $10 billion line of credit. In a letter to congressional leadership on Tuesday, a group of House Democrats renewed their push for a $25 billion appropriation in a forthcoming “phase four” coronavirus relief bill expected to receive a vote in the coming days.

Of the myriad pathological fixations swirling around President Trump’s approach to governing, perhaps the oddest is his unrelenting hostility to the U.S. Postal Service.

Trump was at it again during a news briefing Tuesday, when, prompted by a question from a reporter, he hared off after the Postal Service and one of its most important customers, Amazon.com.

Public Holds Broadly Favorable Views of Many Federal Agencies, Including CDC and HHS

As the United States confronts the coronavirus outbreak, Americans continue to rate a wide range of federal agencies favorably, including two at the forefront of dealing with COVID-19: the Centers for Disease Control and Prevention and the Department of Health and Human Services. Other federal agencies, including the Postal Service, the Census Bureau and the Department of Homeland Security, also receive broadly favorable ratings from the public. 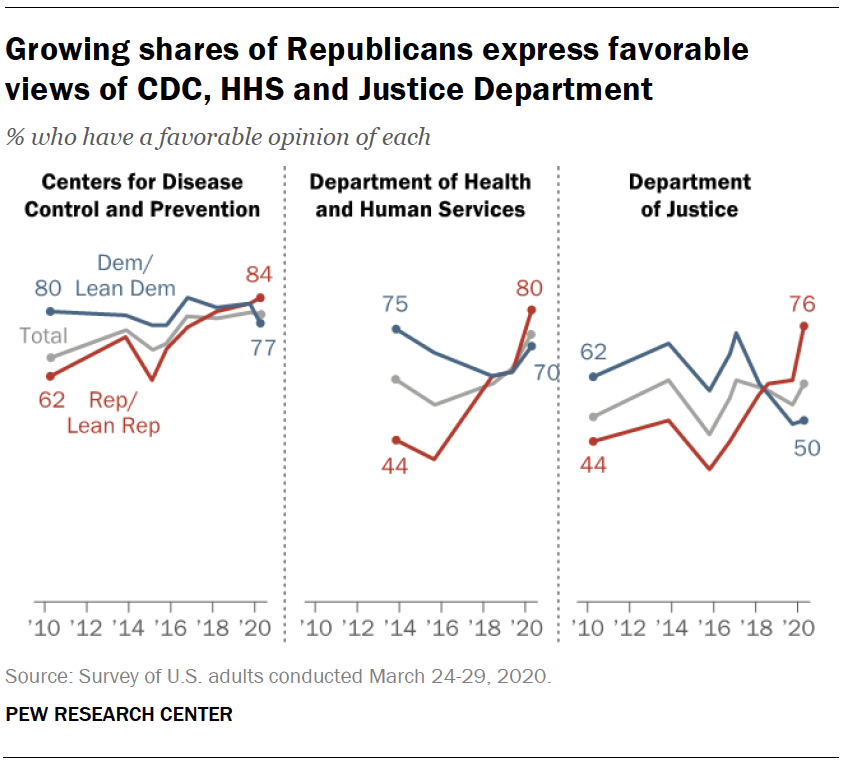 The public has long viewed the CDC positively. Currently, 79% of U.S. adults express a favorable opinion of the CDC, including large majorities of Republicans and Republican-leaning independents (84%) and Democrats and Democratic leaners (77%).

The Real Reason Trump Refuses To Bail Out The U.S. Postal Service

The future of the U.S. Postal Service is up in the air, as President Donald Trump continues to starve the institution of financial assistance. With much of the country shut down, whole industries facing collapse, and individuals and communities struggling financially, Congress has passed a $2 trillion stimulus package to roll out loans to small businesses; and financial assistance to Americans, hospitals, and state and local governments.

But what’s missing from those receiving a federal bailout is the U.S. Postal Service, as Trump refuses to help the agency in what could become a massive blow to voting rights come November. Though Trump signed the CARES Act into law on March 27, which included a $10 billion loan for USPS, the Treasury Department has yet to approve it. The loan would allow the agency to continue funding its operations and payroll through at least March 2021.

As the battle against the new coronavirus rages through April and beyond, a looming question for public officials and political practitioners is what happens to the remaining primaries and what’s the impact on November’s general election?

Primaries, it’s been demonstrated, can be rescheduled. But the idea of a general election delay? Unthinkable for the vast majority of political professionals and constitutional scholars.

Postal workers among those on front lines

Postal workers – alongside doctors, nurses, truck drivers and others – are among the nation’s “essential” personnel who continue to show up for work amid the coronavirus pandemic. Hillsdale Postman Brent Brown has a routine that now includes wiping down surfaces holding the mail he’s about to deliver.

CUPW: Protecting Postal Workers to Protect Us All

“People are relying on the postal system to keep the economy going and getting vital goods to their homes,” comments Jan Simpson, CUPW National President. “They need to know whether their mail is safe. It’s critical that we do all we can, and we will stay vigilant as the situation develops each day.” CUPW asks that customers wash and disinfect mailboxes, handrails and door handles daily if possible. Please allow adequate space for social distancing with postal workers on delivery, respect the posted social distancing protocols in post offices, and please don’t go to the post office if feeling ill.